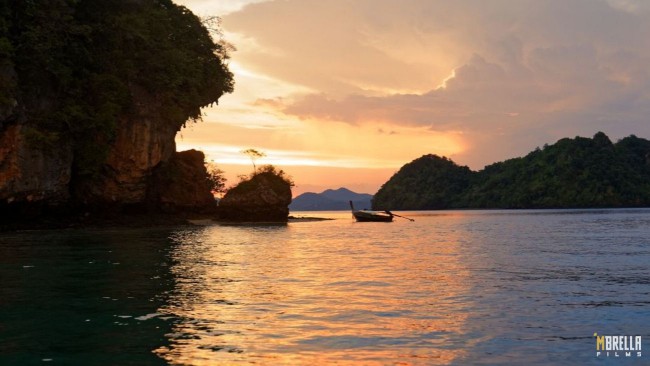 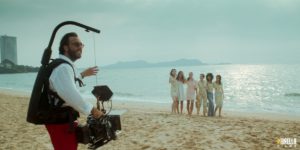 Thailand is the country where The Beach was filmed, a hit travel drama starring Leonardo DiCaprio.

For many tourists and foreign ex-pats in Thailand, The Beach and its film locations were on-screen introductions to this country. This story of modern youth, longing, romance, and suspense was adapted from a bestselling novel by Alex Garland. It revolves around a group of backpackers seemingly on the run from the 21st century. These 20-somethings become seduced by the idea of an idyllic beach that no other tourists know about. Mbrella Films is very familiar with the primary locations The Beach was filmed in, so keep reading to learn more about these visually alluring cinematic settings.

The Beach Was a Story Only Thailand Could Tell 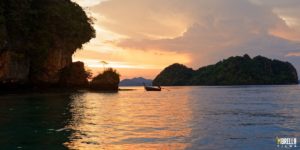 Thailand has sunsets that seem to last a lifetime, lighting the screen up with golden hues.

The Beach stars Leonardo DiCaprio as a wayward backpacker seeking answers to some of life’s most difficult questions. He shares the screen with Tilda Swinton, playing the matriarchal figure of a band of misfits, as well as Robert Carlyle as a burned-out veteran traveler who’s lost his mind in the tropics. These characters and the others all yearn for an authentic experience, unmediated by technology, hierarchy, social mores and capitalism. However, as expected of the law of cause and effect, their strong desire for a sort of spiritual liberation ends up spoiling paradise. Instead of escaping to a mythical Eden, they inadvertently pollute it.

Thailand was both the filming location and setting of the Beach because there is no country quite like it. When backpackers on a gap year or international travelers think SE Asia, they immediately think of Thailand. Thailand serves as most traveler’s introduction to greater Asia, and indeed this country has perfected tourism like no other place. This is why most years Bangkok has as many or more air travel arrivals than any other city in the world. This country has something for everyone from every walk of life. Thailand also has convenient transportation and lodging at any budget tier, gracious local hosts, and an easygoing approach to life that has contributed to the country being nicknamed the ‘Land of Smiles.’

Where in Thailand Was The Beach Filmed? 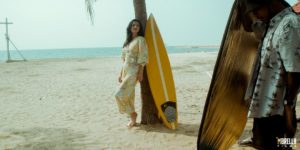 White sand beaches are common in Thailand, which is why feature films often shoot here.

The Beach film locations in Thailand are numerous and spread out across the nation. Many travelers who are familiar with this country will recognize the sands of Koh Phi Phi Leh. This small island is on the Andaman seaside of Thailand, along the shores of the Strait of Malacca. Koh Phi Phi Leh is part of what is called the Phi Phi Archipelago, itself included in the greater Krabi Province of Thailand. The entire archipelago is also part of the Hat Noppharat Thara–Mu Ko Phi Phi National Park. Koh Phi Phi is blessed with sheer limestone cliffs, also called Karst formations. This type of topography is most common in SE Asia and Southern China. The island also has two calm bays, Maya Bay and Loh Samah. Maya Bay cannot be accessed directly from the sea via boat during low-tide, due to shallow waters and coral.

Koh Phi Phi is undoubtedly one of the most famous tourist sites in all of Thailand as well as greater Southeast Asia. It’s easy to see why Danny Boyle, the director of The Beach, chose it as a film location. Koh Phi Phi is also close to Thailand’s largest island, Phuket. Phuket has many amenities including an international airport and is very well developed. In fact, that brings us to a second location featured in the film. Early in the story, Richard, played by Leonardo DiCaprio, wanders the famed backpacker area in Bangkok known as Khaosan Road. Due to logistical factors such as transportation and lodging, this scene was actually shot on Phuket. Another recognizable Thailand film location used for The Beach was Haew Su Wat Waterfall. This waterfall is to the Northeast of Bangkok in the beautiful Khao Yai national park.

Filming in Thailand is Rewarding 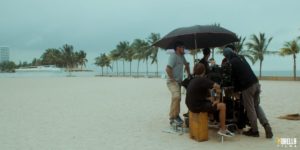 Mbrella Films can assist with all aspects of pre-production, principal photography, and post-production.

By some standards, The Beach was a success and much of that is thanks to the Thailand film locations. The scenery added a definite emotional punch to the storyline. In a sense, The Beach was very much a suspense genre film, while also having themes that appealed to multiple demographics. Viewers go along for the journey as the ticking clock in the story nears the final scenes. Audiences sit on the edge of their seats as it grows increasingly evident that the ideal of paradise will be inevitably lost. The film undoubtedly resonated with audiences, if less so with critics. The numbers can’t lie. The title took in $144 million globally on a $50 million budget. Not a bad return on investment and much of that was thanks to the stunning Thailand film locations featured in The Beach.

Mbrella Films provides film production support in Thailand and any other ASEAN or Asia Pacific nation. We have a decade of experience in Thailand. This includes multiple productions in the same epic locations The Beach was set in. We can help you with feature films, music videos, TVCs, and documentaries on Koh Phi Phi, Phuket, in Khao Yai or any other Thai locale. Don’t hesitate to reach out to us at any time with questions, inquiries, or budget requests. SE Asia is always an open book, waiting to inspire another captivating cinematic adaptation.