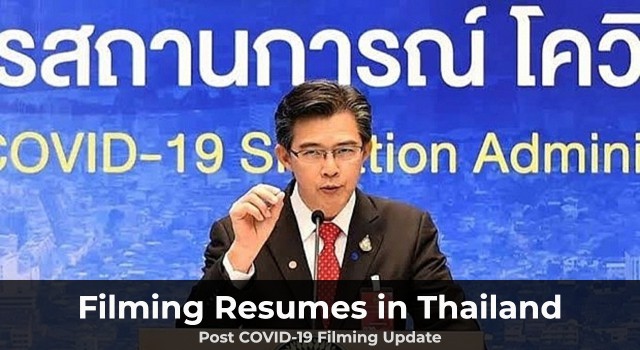 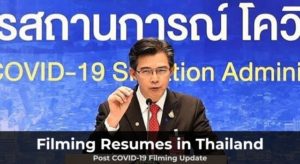 Restrictions on filming activities in Thailand have been greatly reduced. Thailand is once again open for filming. The Film Office is issuing permits again and filming for crews of up-to 50 persons is allowed.

Due to the COVID-19 global pandemic, the Thai government had ordered a halt to all film production activities since March 2020 along with a vast array of other restrictions to daily life to curb the outbreak. These orders evidently had a negative impact of the livelihood of all participants in the 30 billion baht per-year industry.

Recently however, the situation in Thailand has drastically improved. Due to strict and decisive actually taken by the government and health officials, Thailand has been one of the least affected countries from COVID-19 in Southeast Asia and globally. On May 14th, 2020, Thailand recorded no new cases giving a clear indication that things are getting better.

Regulations for Filming and Permits in COVID-19

The current regulations will lift the ban on film production from May 17th, 2020 onward. The government will allow crews of up-to 50 persons to be on-set. Filming will also not be limited to interior or exterior locations but there will be limitations on shooting scenes with close physical contact such as kissing, hugging or any sex scenes.

International production will also be restarted The Thailand Film Office will resume issuing film permits for foreign productions. However, a 14-day quarantine will still be required for any crew or cast members coming from abroad.

Mbrella Films can help you with your production

The use of gloves, masks & face shields as well as frequent sensitization on-set will also be required for all our film production sets.

Though the current situation is not exactly “business as usual”, the easing of restrictions does open the door for much of the filming activities to resume. Moving forward with extreme caution, will allow us all to go back to doing what we love.